Tea is a heterogeneous evergreen plant with many overlapping morphological biochemical and physiological characteristics. It falls under the Theacea familly in the Camellia genus and is named Camellia sinensis, consisting of two main varieties; var. sinensis and var. assamica known generally as China and Assam varieties, respectively. A third variety considered to be a subspecies of Camellia assamica named Camellia sinensis var. assamica spp lasiocalyx has semi erect leaves and is classified as ologophite (leaf angle 50°‐ 70°). The China varieties have small erect leaves and are classed as erectophiles (leaf angle < 50°), while the Assam varieties (considered small trees thought originally to have grown in the forest) have horizontal and broad leaves and are classified as planophile (leaf angle > 70°). Tea can grow into a tree attaining a height of 20‐30m if unpruned and can have very long life span of more than 1,500 years (Ref). The tea plant is extensively commercially exploited. On average a tea bush under optimum Good Agricultural Practices (GAP) can produce up to 3.5kg green leaf/bush/year.

Propagation Tea is commercially propagated by vegetative material. Tea plants can be raised from seed, cuttings and tissue culture (micro propagation). Propagation from seed is less common nowadays following development of operationally easy, rapid and cheap techniques of vegetative propagation (VP), which facilitate easy production of cultivars. However, if required, open pollinated seeds can be supplied from tea breeding seed barriers. Tissue culture is rapid and economical on space. However, it is costly for use in micro‐propagation and is appropriate mainly for breeding purposes.

Sleeve nurseries are recommended for raising vegetatively propagated materials. The factors to be considered in site selection include: The closeness of the nursery to a permanent source of water and the availability of shelter from prevailing wind. Availability of deep free draining soil, friable and with pH range of 5.0‐ 5.6 which is considered ideal for nursery propagation. Avoidance of low lying area which becomes very wet during the rain or which get frost during dry months. Sleeves of 250 gauge with a width of 10cm or diameter of lay flat 5.25 cm and 25cm long. Mix 8 wheelbarrows of sub soil/top soil mixture with ¼ kg of DAP for 1200 sleeves. The sleeves are filled to depth of 17‐17.5 cm (bottom ¾ of sleeve) with sub soil/ top soil + fertilizer mixture. The remaining ¼ of sleeve is topped up with sub soil only. Packing of the soil should be fairly firm; it should not be loose nor should it be packed hard and should be dap always. Care should be taken into consideration in selecting healthy and vigorous cuttings from mother bushes for nursery propagation that have been left to grow freely for 5 to 6 months after pruning. The propagated materials are ready for transplanting for a period of 8 to 12 months. Sleeved plants are ready for transplanting when the roots have reached the bottom of the sleeves and also have at least 20cm (8in) of top growth.

Care should be taken into consideration in selecting healthy and vigorous cuttings from mother bushes for nursery propagation that have been left to grow freely for 5 to 6 months after pruning. The mother bush selected ought to be of a predetermined cultivar for mother bushes. Prune mother bushes twice a year even if the cuttings are needed only once. Prune by a straight normal cut‐across method, about 2.5cm above the previous pruning level or 40cm if the bushes have not been pruned before. Clean out (remove weak and crossed branches) only once a year, during one of the prunes. New shoots are ready for cuttings between five and seven months after pruning. Never allow new stems to remain on the mother bush for more than seven months as the material becomes hard and the resulting cutting grow poorly. Do not cover mother bushes after pruning. Apply twice as much fertilizer to mother bushes as would be applied to plucked bushes of the same age (i.e. rate 300kg N/Ha/yr). Apply the fertilizer in at least two dozes each year. If they are pruned every five to seven months, apply two or three months after each pruning. Take back branches and shoot material left over after the cuttings have prepared, to the mother bushes as mulch.

Wrap cut branches or cuttings (whips) for cuttings in wet sacking, take to shelter near the nursery water immediately. Make cutting under shade and shaded at every stage.Use only vigorous young shoots between five to seven months old when making the cuttings. Discard the very soft tips and the very hard lower parts of the branches where bark is forming. Each cutting should consist of a single leaf with 3 to 4 cm of stem below the leaf. Prepare cuttings using very sharp knives. Soak cuttings, immediately they are prepared, in a container full of fungicide mancozeb (e.g. Dithane, Emthane) for about 30 minutes, before planting. Cuttings with damaged leaves should not be used.

The leaf or the bud must never touch the soil (plant cuttings in the sleeves so that bud is just above the soil level). In cases where the cuttings leaves are natural deflexed (bending backwards instead of upwards), the stems should be inserted into the soil at an angle so that leaves are clear of the soil. During planting, fingers should not touch the top or bottom cuts of the stems as the sweat from the fingers may affect survival. The cutting should be kept moist during planting by frequent watering. Watering should be done gently as strong jets may displace cuttings. Stretch the clear polythene sheeting (250‐500 gauge) taut over the hoops and bury 1ft deep into the soil, to exclude any exchange of air.

Inspect all beds at least once a week, check for weed growth, insect pests’ diseases and treat as necessary. Always weed by hand pulling. During dry weather, keep the soil around the polythene damp. Water the beds 21 days after planting or when the sheet is noted dry. Regulate shade depending on the prevailing weather. Shade should allow 50% of the incoming sunlight. Alternatively, UV nets are recommended for efficiency and can be reused for long hence very economical.

About 3 to 4 months after propagation (new shoots are about 20cmcc), loosen the polythene sheeting at both ends of the bed and leaving the polythene sheeting loose on the ground. One week later, roll the polythene up at both ends and leave it that way so that air may circulate freely. After another one week roll the polythene sheeting up to 30 cm at each end and a week later roll it up 120 cm at each end. Increase this weekly opening by 1.2 m per week until the whole bed is uncovered. Do not allow the soil to dry up during the hardening off process. Start fertilizer application after complete removal of the polythene sheet by making weekly application of NPK(S) fertilizer in solution form of 1g/m2 of nitrogen in 1.3 lL of water (10g NPK(S) in 10L i.e. 1tablespoon of NPK(S) in 10L watering can. Follow with an immediate application of water to wash the fertilizer solution off the leaves of young plants to avoid scorching. Plants are ready for transplanting to the main field when they are 8 to 12 months

The Vegetatively propagated material or cutting for own nursery propagation can be sourced from KALRO‐ Tea Research Institute, Kericho Centre for the stakeholders in the West of Rift Valley region and KALRO‐ Tea Research Institute, Kangaita Centre for the East of Rift Valley region. Some of the latest released tea cultivars by KALRO for commercial use by stakeholders with their various special attributes. 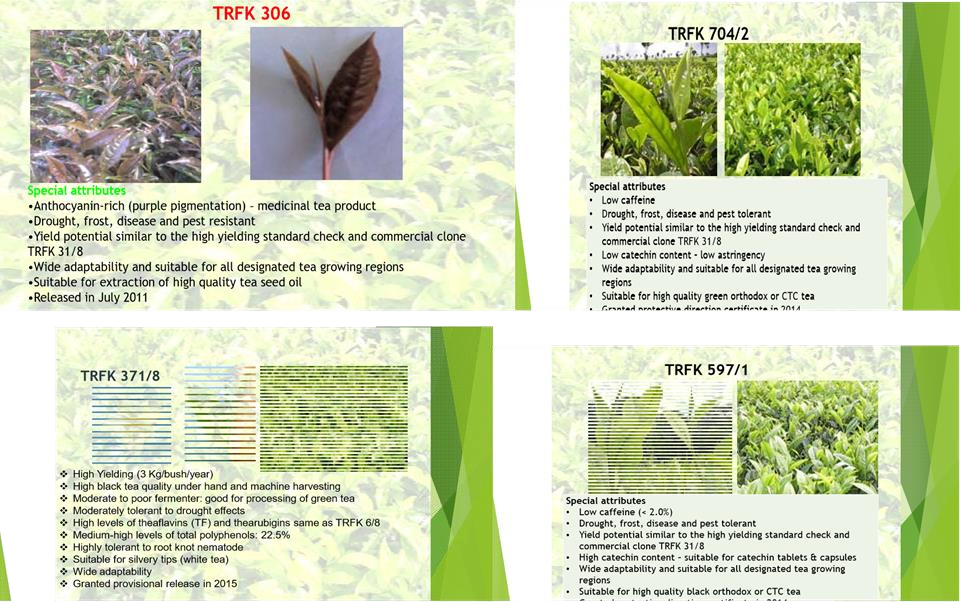 Soil: The crop grows in deep, well-drained, fertile volcanic red soils with a pH level of between 5.0 and 5.6 and at a minimum depth of two meters (m).

Rainfall: The plant grows best in areas where the rainfall ranges between

1200 to 1 400 millimeters (mm) per annum and is evenly distributed, alternating with long sunny days. Kenya, located in the tropic zone, has the ideal climate to grow tea year round with minimal seasonal variation in terms of quality.

Altitude: The optimum tea-producing zone is currently at an altitude between 1500 - 2100 meters above sea level (masl)

Temperatures: ranging from 13⁰C to 30⁰C with optimum of 30⁰C.

Sleeved plants are ready for transplanting when roots have reached the bottom of sleeves and also have at least 20cm (8 in) of top growth.

Pruning operation designed to shape the plant into a permanent frame which is low, broad, heavily branched and capable of producing a large number of shoots (tea table), culminating in a high leaf yield

Fertilizer application the type of fertilizer used in Kenya, the most popular formulation is the imported compound NPK 25: 5: 5 or NPK 20: 10: 10 based on nutrients removed in plucked leaves.

Pests, Diseases and Weed control: Integrated management methods can be employed to manage pests, diseases and weeds tea.Preference is given to manual weed management, to include uprooting, slashing and jembe weeding.

Tea plucking is the removal of the top most bud and tender shoots of tea for processing. This may be done by hand, hand wielded implements or motorized mechanical plucking machine. Tea plucking usually continues throughout the year, with two peak seasons, between March and June and between October and December.